September 27, 2005
I want everyone to know that I read what you read...and a wee bit more. Much of what is available is fairly factual, but some is not. I was reading the current issue of Western Horseman
which has an article on "Unlocking Stifle Problems" by Michelle Anderson. This article deals with
UFP / upward fixation of the patella and for the most part is sound advice. The problem we frequently see in our practice is the unfit (I thought it was fit) horse. This problem (UFP)
arises from a laxity of the Medial patellar ligament which is part of the horses reciprocal apporatus
or locking mechanism which allows the horse to rest standing up. With UFP the ligament is lax or longer and hangs up on the medial side of the femur which causes pain and a stiff leg which drags
the toe behind. Frequently this leg "pops" as the limb comes forward. The old treatment was to
"clip" or "cut" the stifle. This is a surgical procedure where the medial patellar ligament is severed to prevent it form locking. The downside to this is a BIG one.....fracture of the patella. In 15-20% of the cases this occurs and can do so at anytime after the surgery leaving you with an expensive pasture orniment. The only time we do the procedure anymore is in cases where the limb is locked and we are unable to reduce it by backing up the horse. The best treatment is exercise, either straight line or long line lungeing. This builds up the quadricep muscles and thereby pulls the patella into place eliminating the problem. This can require significant amounts of time to properly condition the horse. The article also mentions injecting the joint with counter irritants. This is a NO-NO. No irritating substance should ever be put into a joint,
you can however, inject these substances into and around the medial patella ligament to try and cause local inflammation and scar tissue making the ligament wider and hopefully stop the UFP.
This is frequently helpful but doesn't take the place of a good exercise program.
If you notice this happening to your horse have a thorough lameness exam done to rule out other potential cause and when thats done ......start working your horse.

Anonymous said…
I have a pony (stud) that is too small to ride. He is 2 1/2 yrs old. He has an increasing problem with his right stifle locking. He used to run around and play but now all he does is lie around or stand still. The vet here suggests clipping the stifle but I worry that should I do that it might intefere with his ability to breed. Is this heredity? Maybe I should geld him, if so. He basically is just a pet. Any advice? Thanks!!
6:42 PM

Anonymous said…
UFD is a congentital problem. Do not breed.
5:10 PM

Anonymous said…
Yeah, geld him. Teach him to pull a cart...you can excercise him and have fun doing it. Pulling a cart is excellent excercise for this problem.
10:40 AM

dawn said…
Ok question, I've been reading on this a little bit.... I myself have bad knees and they lock up occasionally... My question is this, with my knees they sometimes " give out" I have arthritis in my knees, my question is can this also happen to horses if they have locking stiffles???
6:45 AM

dawn said…
Question, I have bad knees, I have arthritis and my knees sometimes "give out". My question is if a horse has locking stiffles can they also "give out" occationally?
6:48 AM

Dr. Alan Weldon said…
Dawn. What frequently happens in people is that the upper leg muscles become weak from decreased use because of the arthritis pain leading to the " giving out" scenario. This can happen as well with horses that become weak or atrophied . Strengthening the upper leg with straight line exersize can be helpful as can swimming or extended rides in a couple of feet of water.
12:34 PM

Kathryn Hubbard said…
Hi,
I have been given a horse off the track who has this particular stifle issue. His hindquarters are too straight and as a result one of his tendons has slipped over the patella and the leg locks up. During his race career he bowed the tendon of the right front leg (the same side as the stifle issue) and so is quite at risk for reunjury as it is under much more stress due to the locking stifle. I've been advised to get it cut, should I? I don't know much about the procedure, what it costs, the after effects etc but the chiropractor has assured me that it will fix the problem. Of course I then researched it and found a lot of people who had problems after their horse's stifle was cut. What do you think?
11:04 PM

Dr. Alan Weldon said…
Kathryn
I typically only cut the patellar ligament on those cases that are in a virtual permanent state of upward fixation. The odds of a patellar fracture after transection is about 15-20% which will leave you with an unusable horse. It may be that way now if the upward fixation is not controlled.If possible it might be better to try ultrasound guided tendon splitting or prolonged straight line exercise to increase quadriceps strength . Proceed with caution .
12:23 PM

Chaska said…
My cob had her locking patellas snipped back in september, she was put into a stable for 2weeks and then out on flat grass only, she seems to be back to herself but we noticed that she is now dragging one leg would this be stifle?? Also what do you reccommend to help ease this problem?
6:55 AM

Dr. Alan Weldon said…
Chaska, it could be stifle pain causing a reluctance to advance the limb. It would be good to know if there is ny swelling associated with the stifle. Sometimes pain from the surgery can be persistent or it could be something different all together. I would definitely have your vet take a look as it shouldn't be dragging it at this point....keep me posted if you can .

Ashley said…
Is it true that UPF can be passed to a baby? My Vet says that isn't true but I saw someone on here said it is. What is your opinion Dr Weldon?
6:17 AM

Popular posts from this blog

There have been several horse show signs of acute liver dysfunction recently while eating Purina feeds. The company seems to have jumped on this quickly and found an aflatoxin (mold toxin) contamination from one of their suppliers. It only affects 3 of their plants and the North eastern United States.The following states are under the recall, Connecticut; Delaware; Maine; Maryland; Massachusetts; New Hampshire; New Jersey; New York; North Carolina; Pennsylvania; Rhode Island; South Carolina; More info on Aflatoxins can be found HERE . " Aflatoxins are potent toxic, carcinogenic, mutagenic, immunosuppressive agents, produced as secondary metabolites by the fungus Aspergillus flavus and A. parasiticus on variety of food products. Among 18 different types of aflatoxins identified, major members are aflatoxin B1, B2, G1 and G2. Aflatoxin B1 (AFB1) is normally predominant in amount in cultures as well as in food products. Pure AFB1 is pale-white to yellow crystalline, odorless so
Read more 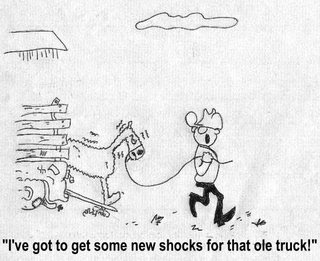 ( angelfire cartoons ) Just to set the record straight....this is a SYNDROME. That means it is a condition with multiple potential causes that has a unique set of symptoms. In this case the symptom is head shaking, this is either horizontal, vertical or rotary and frequently resembles a nervous twitch. Sometimes this is so uncontrollable that the behavior becomes almost manic and dangerous. Over the years many different causes have been attibuted to causing head shaking syndrome, including (1) ear mites (2) allergic rhinitis (3) ocular disease (4) Trigeminal neuritis (5) dental disease and (6) photic headshaking. One, from the fever swamps of the internet , links it to vaccines ( see my previous post about my thoughts on holistics) One older study noted that these horses were frequently over 8 years of age, Throughbred or Warm Blood, owned by 40+ year old women used for hunter/jumper or dressage. Additional studies have linked this to the time of year (seasonal) and most
Read more 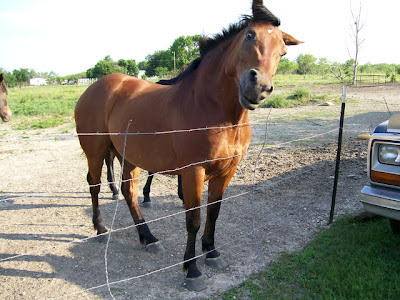 I received a good response and question from a reader and it touches on one of my favorite topics......medical scams, holistic treatments and other 3rd world treatments. This person researched the problem and applied some scientific rigor and has a highly likely diagnosis of Photic Head shaking. Here's the email.. "Hi I have a 17hh warmblood who was treated with steriods last yr and we changed all bedding soaked hay fly masks etc etc and it alll stopped so we put it down to allergy! Well he is off work now and the sun came out this w/e and I found him violently head shaking in the field and in the stable he goes to the back, after alot of research he is looking like a photic cause. I have come accross a product and was wandering if anyone has tried it or heard any feedback? Equiwinner performance patches they are formulated for a variety of things but seem to cure headshaking or so they say? " .....and even better, this scientist questions the claims of a product
Read more

Dr. Alan Weldon
I am a native of Gainesville Fl. and Graduated from The University of Florida College of Veterinary Medicine (class of 86").Beth grew up in Jacksonville, attended Princeton University and we met in Vet School. I began practice with Equine Associates in Ocala Fl, where I spent 6 months there and 6 months in Perth Australia as a resident Veterinarian for Heytesbury Stud. In 1989, my wife, the beautiful and talented Dr.Beth (Van Cleve)and I were married on Cumberland Island Georgia on the steps of Plum Orchard(well before the Kennedy's I might add)setting a trend. I then did my residency in Internal Medicine at Cornell University in Ithaca New York. An intense but highly rewarding experience which was fortunately supported by Beth working at several clinics in Ithaca. We moved to Jacksonville in 1991 and started a rapidly growing family (5 children)and established Jacksonville Equine Associates, a specialty practice devoted to advanced Equine Internal Medicine.Beth has been working at Merrill Animal Clinic for years . This profession has allowed us an amazing opportunity to travel and see the world.....we have truly been blessed.